The shelves were pretty bare in the shop where the Russian dolls were on sale. It was  on and the next day I would be heading home, back to school in . I had better get my Mum a present, I thought, before it was time to go. I just had enough pocket money left. They had fair-headed dolls dressed in some sort of silky national costume and they had those traditional  hollow wooden dolls – kulkas – that fit one inside another, nested 5, 6, 7 or more deep (according to your pocket) until the baby one in the middle was solid. Brightly hand-painted and all subtly different they stood in serried ranks. There wasn’t much else to choose from in those days. I couldn't decide which to get, so I bought both. They sat for many years in the china cabinet that Dad had made at the end of the war. The mahogany was salvaged from a bombed-out pub, the sunrise stained glass was originally fitted upside down – shining downwards – but Dad didn’t have the heart to tell his friend who had fitted it as a favour. So Dad had turned the doors upside-down to compensate and so for ever more we had to turn the key as if to lock the cabinet, when we wanted to unlock it because the lock too was upside-down. Now I have lost the key and the cabinet sits upstairs, unwanted, unused but it is one of a number of items that have survived the numerous rounds of de-cluttering after Dad died. I never had the heart to dispose of it. Not like the Russian dolls. They must have gone in a car boot sale years ago. You can’t keep everything and probably one day soon the china cabinet will go too. 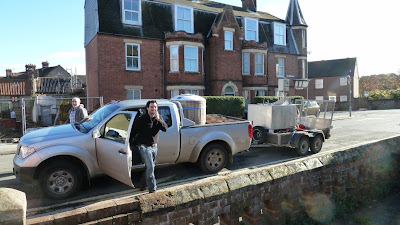 The other week a Russian Doll came back to haunt me. Brendan drew up outside my house with a trailer carrying some brewing kit. Out jumped Edoardo, our younger Italian brewing friend and we hugged. Before I knew it, Brendan was assembling a line of little wooden dolls on the brewing kit in the trailer. “It’s a Russian Doll”, he said, “And so it this”. There on the trailer was a fiendish looking contraption of stainless steel and plastic piping. In the back of the pick-up was a fermenter. This was the brew kit for I had been waiting so long. Well actually, it wasn't really my brew kit at all. It was just a temporary measure to get me brewing at Poppyland Brewery, just in the nick of time for Christmas. It was Friday 2 November. “ I'll get a move on now with your own brewing vessels”, he promised. “ They've got a good welder at the engineering works now”. It was exactly two years since I first met Brendan and told him I harboured a desire to become a brewer. 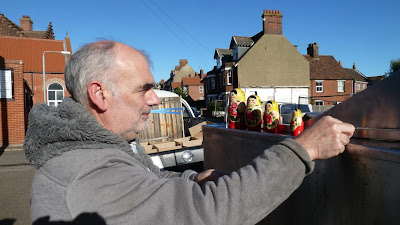 The Russian Doll brew kit was hauled into the brewery and assembled. The gantry was attached, the electrics checked over and the thing was plumbed-in. I had all the ingredients and a recipe in mind, so we were ready to go. The next day and I brewed what I thought was going to be Winston’s Temper, but actually it is now called Smokehouse Porter (see another blog for the explanation). 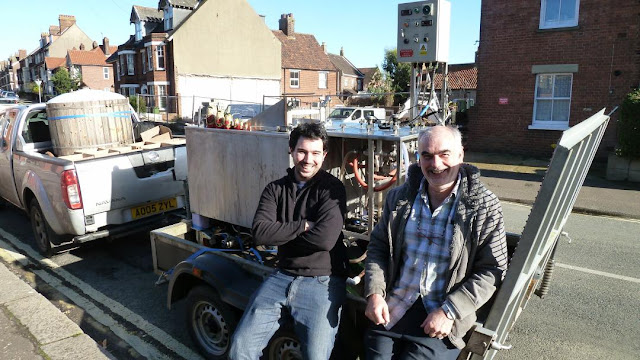 The Russian Doll is a very clever design for a portable brewery, very space-saving and self-contained. It has three vessels – a 1.5 barrel mash tun, a copper and a hot liquor tank and as you may have guessed they fit one inside another. The copper is a permanent fixture in the centre and surrounding it, in the space between the circular copper and the rectangular outer body shell is the hot liquor tank. The mash tun is suspended by a wire and can be wound up and down the gantry with a winding handle. At one end is a control panel with electrics, numerous valve controls, and slung underneath a numerous bits of plumbing, a pump and a heat exchanger. Liquids can be moved from anywhere to anywhere, either for cleaning or for brewing. All it needs is connection to the mains water and electricity and you are in business. I have been getting to know its intricacies as I have brewed in it with and cleaned it afterwards. I look forward to brewing solo quite soon. 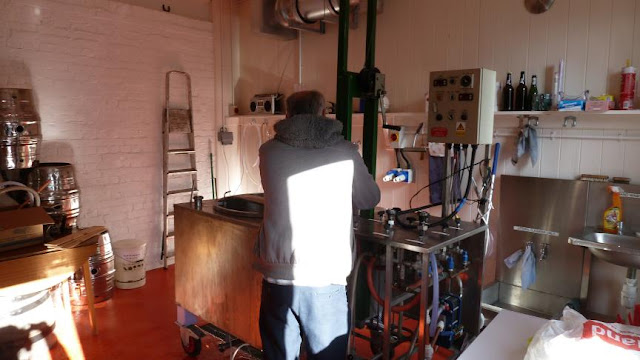