Sometimes my two businesses - geology and brewing - cross over and customers of one become customers of the other. So it was that Andrew Noakes came on a geology walk and later purchased some beer. He was my first mail order customer in fact and has become an enthusiastic fan of my saisons. He took a couple of my beers along to a tasting at his local home brew club hosted by René van den Oort from Beautiful Beers the specialist beer shop and René was very interested - real cork and muzzle he commented. He couldn't sample them though as he was driving. So, thanks to Andrew's lead Poppyland beers came to René's attention. As it happened, I was already following René on Twitter so I contacted him to ask if he would be interested in stocking Poppyland beers in his Bury St. Edmunds beer shop. Possibly he said, but not before he had tried one or two. So I took three down for him to try and he was impressed. 'Superb' he tweeted about "Seafood Lovers' Ale". "Must try", he said about Over the Hill, my collaboration IPA.

So I took Mrs Brewer on a shopping trip down to Bury St. Edmunds and delivered my beers. René and I chatted for much of the afternoon and not un-naturally I bought a lot of interesting stuff from his huge selection of Belgian and continental beers. Quite by coincidence, who should come in to the shop to buy a few bottles? None other than John Bexon, the head brewer of Greene King's brewery in Bury. To my delight he bought an "On the Edge" saison of mine, even before René had unpacked the box. Who would have through it? After years of consuming theirs, it was good to think Greene King were returning the compliment. 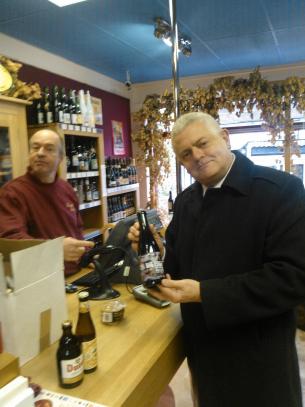 Apologies to René for such a poor likeness of him captured on my phone. He is much more good looking. John, looking very swarve, I am sorry I didn't get to chat with you longer but look forward to swapping notes with you one day.
Posted by Martin Warren at 09:25