A Terrible Beauty is Born

I brewed my first beer when I was 18. That was in 1970 and I remember it well. The 'copper' was just a large pan on the gas cooker and the fermentation vessel was my mother's old green plastic bucket that she kept around the kitchen. Heaven knows what had been in it before: coal, nappies, whatever. It was one of those so-called dry kits that you could buy from Boots. There were crystal malt grains and hops in a mesh bag and I am sure there must have been some malt extract. Maybe it was dried, can anyone recall? I don't know if you were supposed to add sugar as well but I think I did, because the strength of that beer sent me reeling. It was highly effervescent and it was bottled off into those quart-sized cider bottles with the black compound stoppers and red rubber sealing rings. I had those for years.

I didn't brew at university but when I had settled in Norfolk I took it up again for a few years while the kids were young, with slightly better equipment but still using brew kits. It was only in 2008 that Mrs Poppyland Brewer splashed out on a new kitchen at Poppyland Towers and all those smooth black kitchen surfaces and a larger-than-life electric hob got me thinking that I should put it all to good use and start brewing again. So I bought some basic equipment and a beer kit or two and started afresh. I had had the foresight to install a pull-out table that fitted into a drawer unit and that made an ideal racking stillage, with beer (and wine) being syphoned off the work-surface to the receiving vessels on the pull-out table below. After a few brews to get my eye back in I decided to move on to whole grains and started using Brupac's kits but soon I was making up my own recipes and exploring the ingredients that brewers have at their disposal - malts, hops and of course various yeasts. I have never looked back really.

I stumbled upon Brendan Moore and the East Anglian Brewers' Cooperative by chance after a museum meeting in Thetford. I detoured via the Iceni Brewery in Ickburgh in the hope of buying some ingredients and one or two items of equipment. It was late in the day but I found Brendan there - on the phone as usual - and when he got off the phone I mentioned that I had received my redundancy notice and was considering going in to brewing. Well, two hours later I felt I had taken up enough of Brendan's time but he had drummed into me that I would be a fool to start up brewing in the same way that he had done and the same way that most of the other brewers in Britain were still doing. It was a mug's game. But if I explored a different model - brewing less beer but better beers like the Americans and Italians there was a chance of making a go of it. Don't borrow money, he said. Start with what you can afford; don't brew too much beer and don't go selling it cheap. 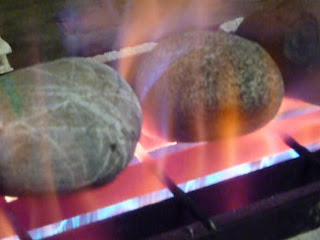 After more than a year of training, experimenting, travelling, visiting breweries and working with brewers I find myself collaborating with Brendan in his Extraordinary Ales project. He asked me to supply rocks for a hot rocks experiment and to calculate the thermodynamics of throwing hot rocks (and later on hot rivets) into wort in order to generate a caramelising super-boil. I did some experiments in my kitchen and watched the heat transfer, making neat little graphs for various temperatures of rocks. We collaborated on a real brew at his Elveden brewhouse and dropped hot rocks into wort. It worked. The wort didn't leap into the air and scald the brewers to death as some had feared. It did the job very well and having just tasted the fermented result from one of the gyles I can declare the experiment a whole-hearted success. 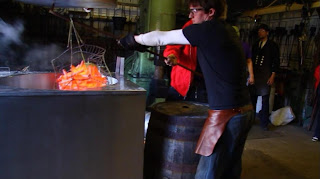 On 19th March a demonstration was given at a 'Slow Brewing' training day for the East Anglian Brewers. We had the resources of the Fransham Forge to help us and 18 kg of large rivets were heated in a furnace. This was much hotter than I ever imagined. There was also an unexpectedly long boil (don't ask why) and about a third of the 100 litres wort had boiled off before the rivets went in. The super-boil certainly was spectacular and there wasn't much wort left but I think the resulting flavour changes are going to be profound. And so this first Extraordinary Ale is now fermenting. In a thinly veiled nod to Irish Republicanism, his beer will be named from a line that is repeated at the end of each stanza in W.B. Yeats' poem about the uprising - Easter 1916 - and 'A Terrible Beauty is Born'. 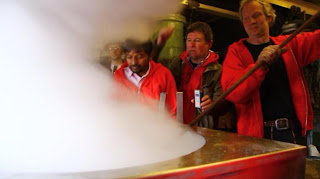 Last two images are lifted from some excellent video footage shot by Adam Jackson.
Posted by Martin Warren at 14:11