When I noticed that the sign over the shop window was made of screwed-on plastic letters it reminded me of Fawlty Towers. I could move them around, I thought and save myself a few bob. So that's how ALLEN'S GARAGES in West Street, Cromer became ALES GAS 'N LAGER. That just about sums up the future output of my proposed POPPYLAND BREWERY. The gas of course has nothing to do with the effects of too much beer on your digestion but everything to do with the by-products of fermentation. As are real ales and lager of course. 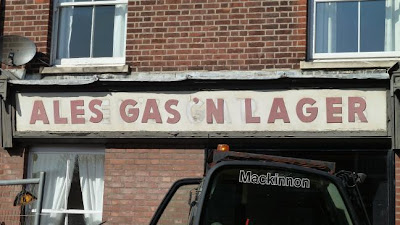 Among beery aficionados lager has earned itself a deservedly poor reputation in Britain for the ultra-cold, insipid, gas-laden yellow liquid that spurts from keg taps the length and breadth of the country. Ubiquitous, bland and over-priced. Some people seem to like it but do they have any idea what real lager should taste like? And that there used to be black lagers and flavour-some lagers and all kinds of different lagers besides Pilsners, stored for months in cold cellars and caves before coming to perfection and being released by the proud brewer to quench the thirst of a grateful public?

When I eventually do brew beer for sale I want the drinker to think, Wow! That's extraordinary. A different drinking experience and worth every penny.
Posted by Martin Warren at 07:48