The final stage of the bus journey up Kytesvegen (Kee-tess-vay-gen) to the Voss Bryggeri gave me déjà vu, for I had rehearsed it on Google Earth Street View in case I decided to hike up there on foot (see video). The scenery was more spectacular than I expected, the mountains closer and the peaks higher. As the familiar yellow building hove into view I was thinking "what a great place to have a brewery, but why all they way up here?" Soon we arrived at the hairpin adjacent to the brewery and the bus stopped to let me off. After a quick gawp at the mountain opposite I made my way in.


It wasn't quite what I expected. Instead of a bar it looked as if the malt delivery van had just left. Pallets of Belgian malt lay around in a space that could have been a general store or a café before it became a brewery in 2012. There was a small bar but it was mainly used for dispensing growlers to the locals that came up here for their weekend refills. Apparently they only open for a bar night every couple of months or so but they are open 4 til 7 on Thursday to Saturday for growlers. What luck that I would be in Voss from Thursday to Saturday. Eventually a fair haired guy appeared and I introduced myself.
"Hi, I phoned a few days ago. I'm the brewer from England".
"I know", he said, "you spoke to me".
He hadn't been too forthcoming on the phone but now I could see that he was friendly really, just very laid back. This was Dag Jørgensen, one of the three owners.  "Come on", he said, "let me show you around."


Just a few steps away I found myself staring down on some very swish stainless steel. Squeezed in to a tiny space but extending over two stories of this building on a hillside was a very neat 10 hectolitre brewery. They brought it in through the back door and then stood the tanks upright. Very nice. "That was a big investment", I said. He didn't answer but it clearly was. The original brewhouse was manufactured in Portland, Oregon and additional fermentation tanks from Italy. 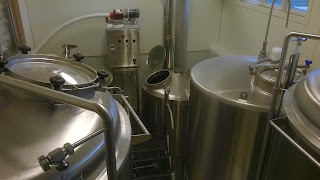 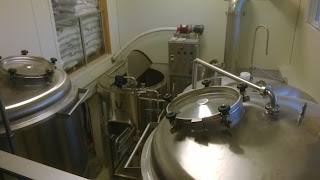 On our tour we met one of the other owners, Dag's partner Jeanette Lillås and their delightful baby daughter. She and Dag are from the east of Norway, outside of Oslo but lived in Voss for a decade before starting this venture and now live in the brewery. From the balcony at the rear was that gorgeous view of the mountain again and evidence that they had recently been brewing some vossaøl: juniper in a large pot, a cauldron and remains of a hearth.
"Yeah, we make real vossaøl once in a while, 3 or 4 times a year but we can't sell 8% beer to you in a growler. We have to sell it to the state monopoly because it is over 4.7%."

We saw the lower level of the brewery and then came back round to the bar and there was American brewer Wright Hollingsworth filling up growlers. He had once been production manager in a big brewery in Montana  but was enjoying being part of the small team at Voss Bryggeri. He didn't like the state control of alcohol in Norway at all but Dag was quite philosophical about it.
"It make sense in a way", said Dag. "It secures the consumers a broad selection at reasonable prices.
" Do you mind? Do you live with it?"
"Yeah, I think its good. I like it. Without the Monopoly you see the selection drop and the prices go up. If the bigger brands or importers have the funds to push their products to the retailers, you see the same product in every supermarket. In Norway you can go the Monopoly and get a nice imported product at a reasonable price. So yeah, I like the Monopoly even though it limits us in a way. It benefits the consumer. It would be nice to sell bigger beers out of the brewery but we've got used to it."

A beer was thrust in my direction, VPA (Vossa Pale Ale) 6.5% and I sipped it reverentially. It was good stuff: juniper infusion, fresh and interesting, fruity, grapey Nelson Sauvin NZ hops. We continued to chat, about how their name was growing and they struggled to keep up with demand.

Then another beer was proffered. "That's vossaøl."

Here it was; the object of my journey. I held it up to the light. Distinctively deep dusky orange-brown, slightly hazy and gently carbonated as it had been kegged, with a tight white head. The aroma was slightly of orange marmalade but with something else. The first sip confirmed the weight of malt that went into the brew, it was malty, dry but with a peppery kick. It was nicely balanced with gentle hops, which Dag told me were Strisselspalt. There was an orange note but in addition there was that dry pepperiness that pervaded the beer, a flavour I had never encountered in a beer before. This was the juniper infusion that is typically used for washing down equipment (it has a bactericidal property) and also as the brewing liquor for vossaøl. It was a real quality brew and completely new to me.


I bought a t-shirt; dark grey, with their distinctive v-shaped logo of a glass of yellow beer with a white head. Out of the corner of my eye I noticed the Dag was filling a two-litre growler. I thought it was the tap that he had got the vossaøl from. I bought a second t-shirt as it would make a good present one day.

Dag served up a third taster, this time a black beer but I don't know what they call it. It had a strong roasted malt aroma but tasted much lighter body than I expected and drier that expected, heavy black malty flavour. Luscious. 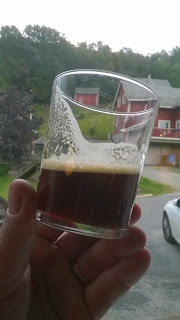 He left me alone while I sipped the beer and he talked with his customers. I can't speak Norwegian but could make out the word "humle" in the conversation a couple of times and "vossaøl" and "kveik", so they were clearly talking beer. What else in a brewery?

"I'll be leaving in the next five minutes", Wright whispered in my ear, offering me a lift back to Voss. I went to say my goodbye's to Dag and wished him luck with his enterprise and with the growing family.

"I have a surprise. I am filling a growler for you", said Dag.
"You are?? You said you couldn't!".
"I can't, but if you come to Voss from England to explore the local brewing tradition..."
"You'd better work out a price", I said.
"Can't sell it to you, man".
"Well, I'll just leave it on the doormat then. How much is the glass growler?"
"One ten...or another t-shirt."
"We'll do that then. One-ten and another t-shirt".

I said my goodbyes and expressed my gratitude for the hour and a half's visit and a whole growler of vossaøl, saying that if he ever came to England I would give him any assistance I could. I then jumped in to the car with Wright and off to Voss, where he dropped me, of all places, right outside the Vinmonopolet - the state wine monopoly that controls the sale of everything over 4.7% alcohol. Ha! 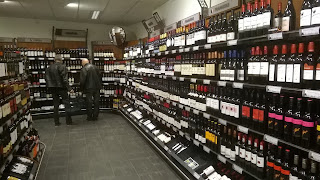