Norway, like many countries, is experiencing a healthy growth in the number of startup breweries but it also has a farmhouse brewing tradition going back centuries that it is alive and well in the districts of Voss, Møndal and elsewhere. On my first day in Voss I got to see examples of both: the old at the wooden farmstead of Mølstertunet, part of Voss Folkemuseum (this post) and the new brewhouse at Voss Bryggeri some 12 kilometres away from Voss (see Part 3).

[By the way: the o slash character ø is fairly common in Norwegian and is pronounced somewhat like a German o umlaut ö. To say the word for ale - øl - round your lips and push them forward while saying "earl". Hope that helps.]

My trusty mobile has become an invaluable tool and now I almost entirely depend on it to run my life. A bewildering array of tools and services that only a few years ago would require a van load of devices and documents to provide its functions are now available in my trouser pocket. It is truly marvellous and yet my careless reading of the digital map of Norway on my phone would twice lead me the wrong way. Eventually I found the path up the hillside to the Voss Folkemuseum but not before I had the opportunity to inspect a lot of Norwegian domestic architecture and garages on the outskirts of town. More interesting than you would think actually.


I was probably the only visitor up there that morning so Brita Tveite, the museum attendant, had to take a great bunch of keys to open up the ancient farm buildings for my inspection. Abandoned in 1927 when the two farming families who had occupied its 16 buildings built themselves new houses nearby, Mølstertunet remains untouched by the passage of time. Its dark wooden buildings beneath turf roofs and local slates (skifer in Norwegian) look just as if the old inhabitants would come around the corner at any moment. 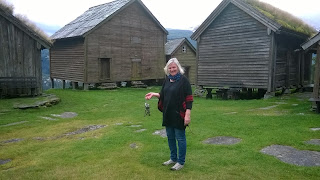 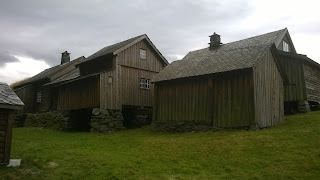 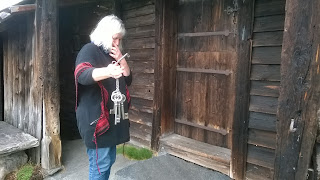 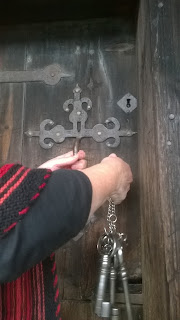 I was left to my own devices and I wandered from building to building. Though it was a museum, the intervention of labels was almost non-existent and that made it easier to be transported one hundred, two hundred, three, even five hundred years into the past and I imagined the hearth alight, the smell of wood smoke and the conversations in Norwegian dialect as the days' chores were done. Everything was of wood: walls, ceilings and floor, utensils and containers. In contrast to the echoing terrazzo and marble of Italian rooms, the atmosphere is hushed, homely and wonderfully warm to the touch. And yet, when I looked closely I could see through the gaps where the walls meet the floor. "Wasn't it cold and draughty?", I enquired. "No", I was assure. "When it was occupied, all the gaps were stopped up and when the fire was lit they were very cosy." 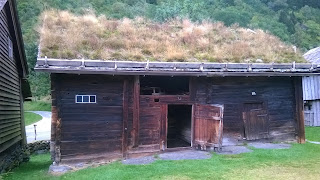 Outside, the small farmyard was perhaps greener now than when rough shod boots tramped over it but there were huge slabs of flat rock laid in strategic places. Hops grew up the wall beside the farmhouse door. 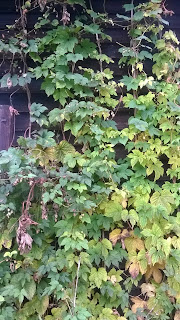 Included among the cluster of buildings was the all important brewhouse, for beer was an important component of farm life, providing hydration and sustenance for hard workers, relaxation and entertainment after the day is done and comfort on long winter evenings. Back in the day they produced lower strength beer for daytime refreshment but today the only beer that seems to be brewed is the strong, dark vossaøl and modern variants of it. At the very least vossaøl is brewed in the autumn, ready for Christmas. Some brewers make vossaøl five or six times a year or for special occasions such as weddings. The attendant showed me the brewhouse, with wooden mash tun, copper cauldron suspended over the hearth, wicker sieves and wooden ladles. They had all the equipment to brew a vossaøl. The farm even produced its own malt, for there was nowhere to buy it and of course they used "kveik", the family yeast, that was handed down through the generations. It was preserved by drying in freshly ironed linen or on a complex wooden puzzle called a yeast ring, to tide them through periods when they weren't brewing regularly. 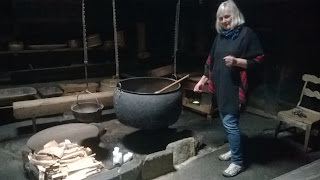 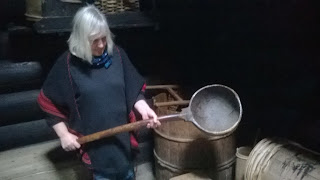 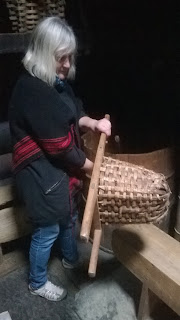 I asked Brita Tveite about traditional brewing but she professed her ignorance of the details, saying she would try to contact one of their joiners who was a traditional brewer. "They must be fairly thick on the ground", I thought. "That's three I know of already."


Sure enough, Magnar Garatun came and found me in the museum galleries and we had a half hour conversation, which I recorded, amongst the displays of traditional wedding costume and Viking drinking vessels (ølkjenge). He lives on a farm at Mjølfjel, to the west of Voss that has been in (his wife's) family for about 300 years and he learned about vossaøl brewing from his 80-year-old father-in-law, who also made his own malt when he was young. He evidently enjoys brewing with father- and brother-in-law for while it takes all day (and father sometimes nips off for forty winks in the middle of the brew) the occasion is a convivial one as they consume plenty of vossaøl while they brew. That might explain why he was hazy on the details of temperatures and gravities but he said that it was all written down in a book which they referred to on the day. They brew normally once a year, in October for the Christmas beer, or more often if they are going to have a party or a wedding. Their vossaøl is strong, around 9 or 10% and it has to be dark and thick if it is for Christmas.

Because there are many brewers they can nowadays buy malt, for instance Münich malt at Voss Gass in Skulestadmo, where they also sell propane gas and brewing equipment: everything they need really. They have a special room on the farm, with a big 180 litre 'copper' fired with wood. They use juniper (einar) infusion for washing down and brewing liquor (made from a couple of plastic bags full from the woods) and they mash in a plastic mash tun. Proceedings start at 7 o'clock in the morning. They brew all day and finish maybe at 8 o'clock. They boil the wort for "some hours", so they start with 120 litres and reduce it to 90 litres. Other people have said it is boiled for 3 hours. At the farm at Mjørfjel they like a good hoppy taste so they use vacuum packed pelleted hops (but he couldn't remember the variety) but he also uses the wild hops that grow around at the museum. For dispense, they use a Cornelius keg nowadays but previously they used plastic (Coke) bottles, which were not so good he says and before that it was wood, of course. They normally keep the beer a fair time before it is all gone; "we can't drink it all at Christmas."

In Voss they have had a competition for the last 5 years, although last year may have been the last as the numbers had dropped off. It took place in a small guest house on the way to Bordalen (about 20 minutes from Voss) and  30 or 40 brewers used to enter one and a half litres of beer and there were 4 or 5 judges. They tasted all the beers and ranked them. There was a variety of beer, both good and bad and sometimes there was some discussion because some were thought not to be in the traditional Vossaøl style. I asked if many of the brewers used kveik and he hesitated. He said there was one man he knew of who was regarded as a good traditional brewer, his name was Himmler, but it is not so usual to use kveik nowadays as it was easier to buy yeast from the store.


I wandered around the museum and enjoyed the display but I didn't see a yeast ring; that would have been good. I wonder if they have one in the collection. The centre-piece is a beautifully carved wedding procession (Ridande vossabryllaup) made by a well known carver, Gudleik Brekkus. A similar second set was lost in a fire, so this is the only one surviving. I was also very taken with a temporary exhibition of cartoons by the talented and much loved Voss man, Ivar Kvåle. He was a little older than me and died only recently although he looked very fit and athletic in his recent photos (he was a marathon runner too and a musician). The clock ticked round and soon it was time to head back down the hill to take the bus to Voss Bryggeri (see Part 3).