The new season of my Geology Walks at West Runton (Norfolk, UK) began yesterday, which was Easter Sunday and I had a party of 23. There is a wealth of geology to see in this small compass but the highlight for most would be the grave site of the West Runton Mammoth, discovered in 1990 and excavated 1990-1995. This was an extremely well preserved skeleton (85% complete) of a large bull of the ancestral species, the Steppe Mammoth (Mammuthus trogontherii). It died in its prime at the age of 41 and its cadaver was eaten by hyaenas (Crocuta crocuta), their characteristic tooth marks being evident of the bones. Many of the smallest bones were missing, removed presumably by the hyaenas and there was evidence of a serious subluxation (displacement) of the knee joint with which the creature had survived for some months before succumbing.


This is Britain's oldest and most complete mammoth fossil. Imagine my surprise and delight then when, as I was about to launch into a spiel about larvikites, I was hailed by a voice from afar. It was my old friend and colleague Professor Tony Stuart, who directed the excavation of the West Runton Mammoth. "Martin, good to see you. I'd like to introduce you to Dr Sergy Vartanyan and his partner Diana." I smiled politely and shook hands. "He published the discovery and radiocarbon dating of the relict population of mammoths on Wrangel Island". I stepped back in honour and amazement, beamed, took off my hat and bowed. Well you would.

It was widely believed that all trace of the woolly mammoth (Mammuthus primigenius) had disappeared by 9,500 BP, the victims of environmental changes at the Pleistocene-Holocene boundary, or by hunting pressure from humans, or both. But in 1993 Vartanyan and his colleagues demonstrated that the population of Wrangel Island, in the Arctic Ocean, had lived on, as they had found teeth dating between 7000 and 4000 BP. Mammoths almost made it into modern times. He also discovered that they were very small (180 - 230 cm shoulder height) on Wrangel, not 'mammoth' at all. Compare this with the West Runton Mammoth, estimated to have been 400 cm.

Where is Wrangel Island? Well, at West Runton we were just 84.2 km to the east of the Greenwich or Prime Meridian (the line of 0 degrees longitude). If you follow it northwards you pass between Greenland and Svalbard and on to the North Pole. At this point you are somewhere in the middle of the Arctic Ocean. Beyond the pole the line is called the Antimeridian. Keep going until you approach the northern coast of eastern Siberia. Before you get there the Antimeridian bisects Wrangel Island. It is 6,231 km away from Runton 'as the crow files' - assuming they fly by the great circle route. You can see where Wrangel is in this picture of Sergy and Diana in their St. Petersburgh apartment (courtesy of Tony Stuart). It is close to the top edge on the top right hand side. 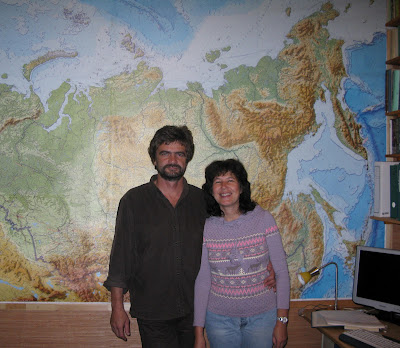 It was a great honour to have the scientists who worked on the oldest mammoths and the youngest mammoths making a guest appearance on my Geology Walk!
Posted by Martin Warren at 01:24