A Dirty Weekend in Paris, with beer

"Here are the keys", he said. "I changed the sheets on the sofa bed and now I am off  to the South of France. See you next week." And with that we found ourselves alone in a 'Cute little apartment in the best district of Paris'.

We didn't know him from Adam but his name was Frederic. His food was in the fridge, his dirty washing was in a pile in the bathroom. There was a ring of dirt around the bath. No vacuum cleaner (though there was a pipe from one) not even a dust pan and brush. All the wardrobe doors were bike-padlocked up. Just two drawers to put our stuff in. There was more but I won't bore you. Mmmm. Cute. 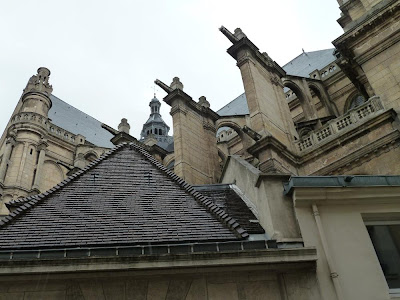 But it certainly was central; the 1st Arrondissement. The Louvre and Notre Dame were just a few streets away. The Gothic gargoyles and flying buttresses of the Eglise Saint Eustache loomed over us as we looked out of our first floor windows. The street was quiet and the windows double-glazed, although the Pompiers de Paris had their station literally next door. Fortunately they don't put the siren on until they leave the street.

It was a rainy week and not quite the Springtime in Paris we had hoped for. We were grumpy at first but, for me at least, Paris began to get under my skin. I was warming to it's history and grandeur as the days passed. We walked the streets of the Marais, the Latin Quarter, walked around the Louvre, visited the Tour Eiffel (but didn't inhale go up it on account of the queues for the one serviceable lift). We ate a lot of cakes. Then, just as I was about to walk past it, Mrs Brewer saw a beer shop, a very special beer shop. Le Cave a Bulles. Proprietor Simon Thillou was happy to talk about beer and was delighted to hear that I was opening a brewery. Maybe I would bring him some when we were in production? Sounds like a good idea. 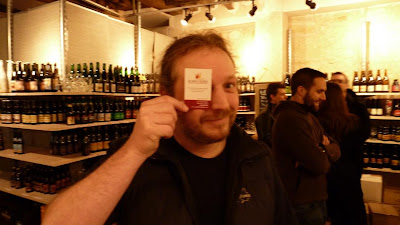 Also in the shop was Simon's American friend Jordan. "Don't buy the Mikkeller 'It's Alive'. This is better. If you only buy one, buy this" and he handed me a different Mikkeller beer. At €34 it ****** **** ought to be good. I looked at Mrs Brewer. "Go on then", she said. So I became the owner of the most expensive bottle I have ever bought. I don't suppose I can put it down as a business expense but it was certainly good research for where I need to go with Poppyland Brewery. These are the leaders and the competition. 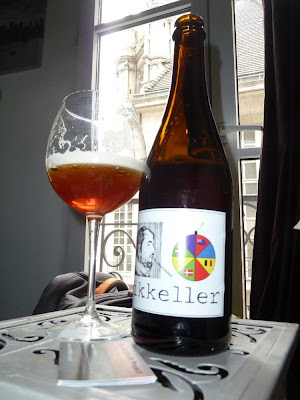 It didn't disappoint. The Mikkeller Nelson Sauvignon is a very special beer. It was plastic corked and muzzled in a sensibly brown 750 ml champagne bottle, 9% abv and it had a wonderful deep orange amber colour. The aroma just climbed out of the glass, powerful, citrus orange from the New Zealand Nelson Sauvin hops. I knew what was coming: it was going to be big. Yep. It was. A lovely foaming white head developed as it was poured, sinking gradually to a persistent ring and lacing. The first taste was huge, stacked full of fresh citrus, orange peel, Cointreau, yeasty, bitter-sweet, cidery, gorgeous, more-ish. The aroma was still there an hour later, huge, bursting. I had never had a beer like it, now smelling of fresh tea and autumn leaves in warm sunshine. This was all balanced by good malt but really, it was the hops and the gentle brett that were the stars. Ooooh! Exquisite. A tiny sip just filled the mouth. Its three months in the Austrian wine cask had certainly been time well spent. That bottle kept me entertained for the rest of the evening as I read the excellent and stimulating resource book for brewers, 'Radical Brewing' by Randy Mosher. I won't forget that evening. €34 well spent and cheaper than a disappointing 2008 Chinon that we drank at Les Papilles later that week. The food there was good, but not such good value for money as lunch at the restaurant of Alain Ducasse at the Dorchester on Mrs Brewer's birthday. It's all about the difference between cost and value for money.

By the way, in London on the way home, I visited Cask and Kitchen's Pimlico joint and there I found Mikkeller's 'It's Alive' on tap, all-be-it on top pressure. It didn't disappoint either, but it was rather cheaper, £4.60 a half if I recall. It's a busy establishment but very good for craft beer. Go there.
Posted by Martin Warren at 09:11