A Great Way to Lose a Day

It happens every now and then. You have something in your diary that is cancelled at the last minute. Mentally you have written that day off, so when you suddenly have a ‘free day’, what do you do with it? I’m not one for lazing in bed (oh okay, sometimes I do), but as a rule I try to get some ‘me’ time in and do something crazy instead.

So it was that last Thursday I decided that the time could be spent, squandered if necessary, on a deeply experimental brew. For some time I have been following the blog of Lars Marius Garshol, a Norwegian IT developer who takes his beer hobby very seriously and writes a very honest and engaging blog. He is currently researching some of the more obscure and ethnographic parts of the Baltic and Scandinavian beer world. He is telling us about Norwegian farmhouse beer – maltøl (more on that later) – and also about his travels in Lithuania and beyond. Now it so happens that my mother-in-law is Lithuanian and she is on her last legs as I write this; so I have been reading @Larsga blogs with interest. One of the styles he describes from Lithuania is a baked beer called keptinis and his latest blog describes the scant information recorded by historians and ethnographers. Responding to a challenge laid down by @thornbidgematt in a recent tweet I thought I would have a go.

I say that the information is scant: there certainly isn’t a recipe and some of the information is contradictory. The outline of the keptinis process is that the grains are made into loaves and baked, then mashed and the wort is fermented without boiling. It is a raw beer. What I don’t understand yet is, why would you do that? By all accounts it is hard work and time consuming, so there must be a good reason to make beer this way. What possible reasons could there be?

In broad terms any process (like baking) must either produce something that you want (like breaking down complex ingredients to something simple, creating some colour (from Maillard reactions) or developing flavour) or else it is there to prevent a problem, like infection by bugs that you would rather avoid by sterilisation.

If you do bake the mash it seems to me like a great way of destroying the enzymes that the maltsters have carefully generated from the barley. The job of those enzymes is to convert the starch in malted grains to maltose (a sugar) so that the yeast can ferment it. It seems wrong to subject the enzymes to heat and very likely destroy them. Along the way you may get some flavour and colour but it does seem rather dodgy. On the other hand, if you are not planning to boil the wort before fermentation you need some way of controlling the bugs you don't want; like killing off the naturally occurring bugs such as Lactobacillus that live on the grains, or otherwise you will always get a sour beer. Keptinis is not reported to be especially sour, at least not when it is fresh.

So I went in to this brew day not quite understanding why they used this method and having to best guess the exact ingredients, quantities, temperatures and timings.

The guidance given by the ethnographers in papers that was reported by Lars is vague and contradictory. While farmhouse 'styles' are notoriously variable there are a number of features that seem quite impractical to me:

1. The malt bill suggested by the historian Juozas Petrulis (1975) was "1 kg pale barley malts, 2 kg rye malt, and 2 kg oats". I regarded this to be the perfect recipe for a stuck mash. The quantity of oats in particular, without the use of rice hulls to aid the flow, was asking for trouble.

2. One wonders if there are enough enzymes present to convert the starch, from only 1kg of pale malt.

3. Would the baking process not destroy what enzymes there were?

Here is what I did, intending to make 19 litres of beer by the Brew in a Bag method:

The dry malt bill was mixed in a large bucket until even. Then 1.5kg at a time were put into a large mixing bowl and about 1.4 litres of near boiling water added, enough to wet all the grains and make a stiff mix. 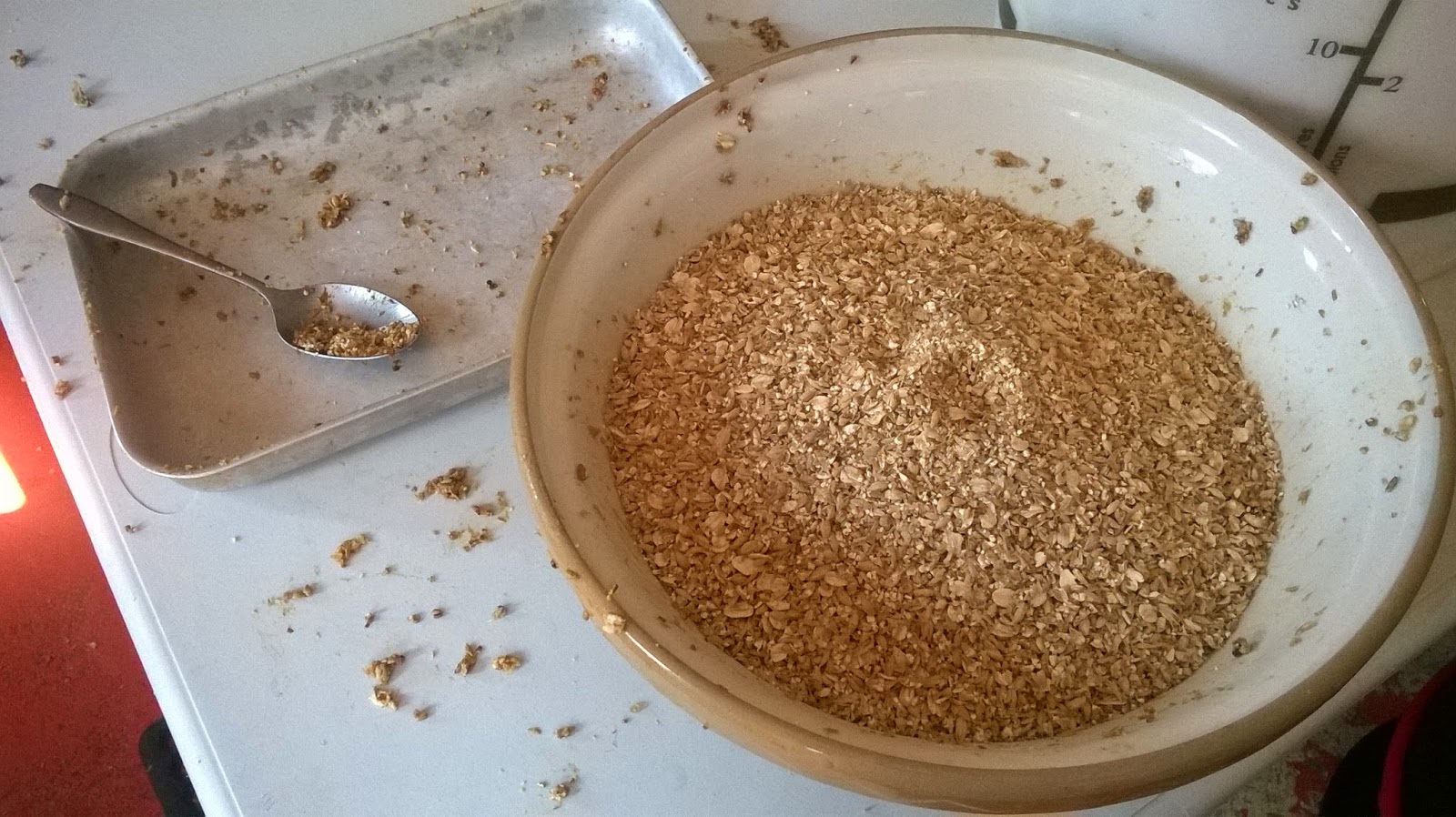 This was quickly put into a shallow baking tray to form a flat 'loaf' and turned out onto a newspaper. Four of these were produced, which fortunately was as much as I could fit in my oven. The instructions in Larsblog said to lay them on a bed of straw but I didn’t have any straw, so I used newspapers, as I guessed that the purpose of the straw was to absorb excess liquor during baking. 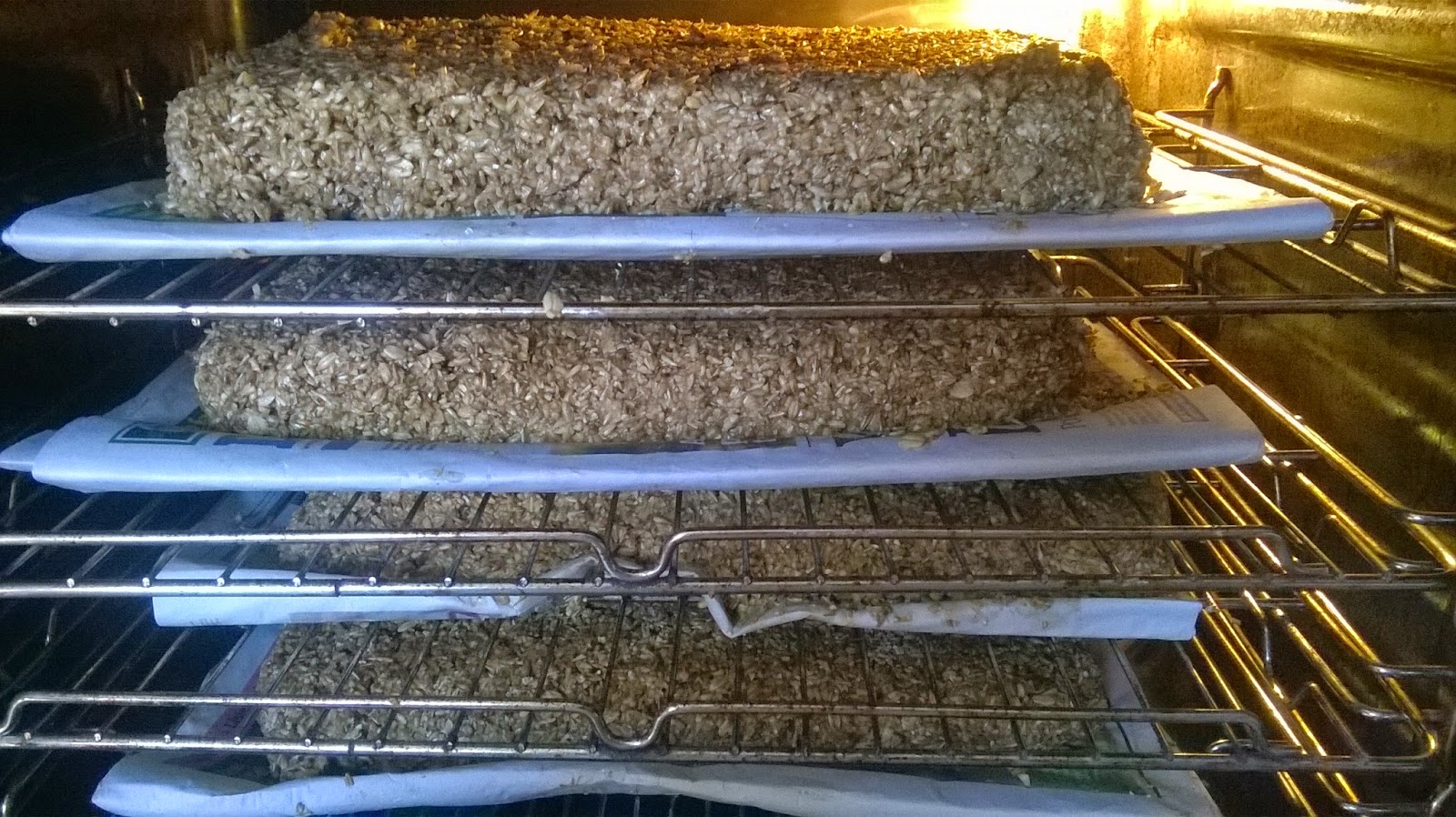 They were taken to the kitchen and placed on oven shelves and baked at 190C for one hour. At that point three of the loaves had developed a toasted crust (a little darker in one corner) but the fourth (see second shelf up) was still soggy and pale, so it was placed back in the oven for another 30 minutes until it looked like the others. This contradicted the guidance in Larsblog which said bake at 177C for only 20-30 minutes but my loaves hadn’t cooked much by then and certainly hadn’t developed a toasty crust which is mentioned. One report in Larsblog said to bake the loaves until black and crisp but I thought that was just too extreme, and unlikely to produce any fermentable wort at all, so I ignored it.

The newspapers absorbed a fair amount of strong sticky wort that oozed from the base of the loaves. The original instructions called for straw but I didn't have any. A certain amount of the straw must have stuck to the loaves, so it must have been added to the mash too. I tried to remove as much of the paper as I could but it was very sticky. I might think of something else next time, if there is a next time. 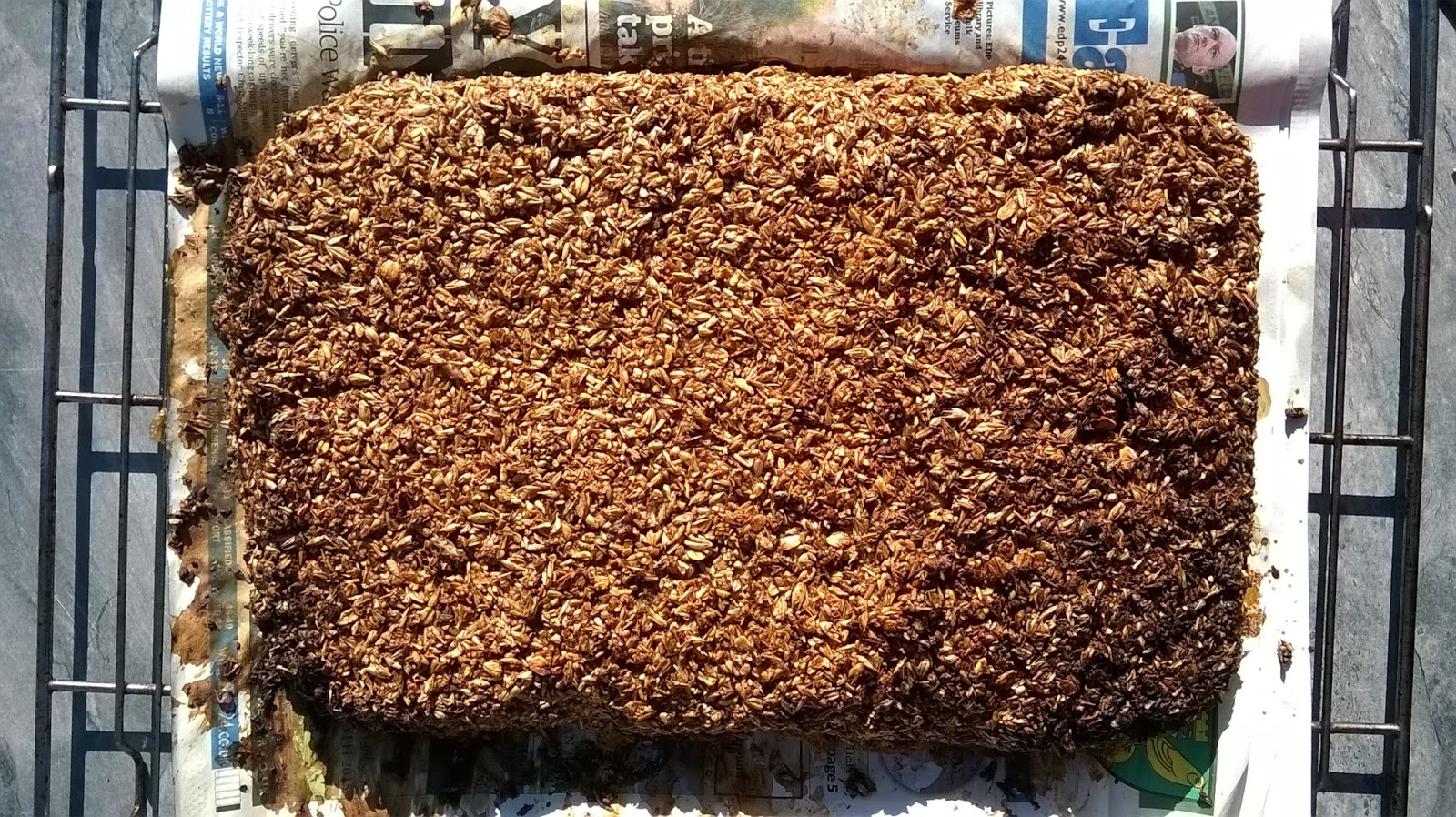 The loaves were quite flat and apart from the crust were still very moist inside, despite being baked for much longer than the recommended 20-30 minutes. I took them out and set them to one side. They began to harden up a little as they cooled, as a cake would. They looked like giant flap-jacks.

A bucket was sterilized with Peractic acid and filled with 11 litres of boiling water, one kettle at a time. It was insulated with a large duvet. 2 litres of cold water were added to bring the temperature down to 72C. Then the baked malt, still slightly warm, was crumbled into the mash tun. I tried to crush the harder crust in a pestle and mortar, as recommended, but it wasn’t crunchy enough. The temperature of the mash had reduced to a perfect 65C. A further 1.5 litres of boiled water was added, by which time the 5 Imperial gallon (23 litre) bucket was fairly full. The whole mash was stirred and the lid put on and kept insulated for 4.5 hours (yes, 4.5 hours) inside a sleeping bag and a double duvet. After 2 hours the temperature was still 65C.

I quite forgot to add the hops to the mash, so 100 g of green garden Goldings were taken from the freezer and boiled separately in a couple of litres of the wort for 20 minutes. This was thought to be equivalent to 50 g of dried hops that should have gone into the mash to give an estimated IBU of 25 units.

After nearly 5 hours the temperature was still 64C (good duvet!). The hopped wort was added and the wort was strained off through a brew bag into a freshly sterilised bucket. The mash was gelatinous and very reluctant to run through the fine mesh. In the end I was satisfied to use only a 1mm sieve, then a after that collapsed under the weight I settled for a conical stainless sieve but it was still very slow because the mash was so gelatinous.

It seems like a huge amount of work (no, it WAS a huge amount of work) and the extract is not very good. I recovered only around 9 litres from the first runnings at a gravity of 1055. Vast amounts of liquor have been absorbed by the gelatinous grain and weren't running out. In total 16.8 litres of liquor went in and only 9 came out (before sparging). Should I sparge? It was half past midnight.

I sparged with a relatively small amount of boiled water, as I didn't want to reduce the OG too much. It came down to 1050 and at that point it was one o'clock in the morning. I pitched yeast cultured from Helsingborgs Kaffestout, aerated with an electric hand blender (whizzer), put it in the airing cupboard and tumbled in to bed at 1.30am.

The next morning I whisked the wort again to aerate it and encourage the yeast to grow. By the evening there was no discernible fermentation activity. I was concerned about infection, so I whisked again with my blender and tipped a packet of T58 in to the wort. By Saturday evening there was still no activity. On Sunday morning the wort was flat still and it looked disgusting (below). I tasted the wort. It was not especially sweet, had a certain acidity but most crucially had an thick mouthfeel, like engine oil. It was horrible. I had a feeling that there were no fermentable sugars in the wort at all and it was just jam-packed with unfermentable dextrins. Whatever bugs survived the baking were probably beginning to sour the mash. I thought that with that slimy mouthfeel and the growing acidity, this wasn’t going to produce a beer that I or any body else would want to drink! 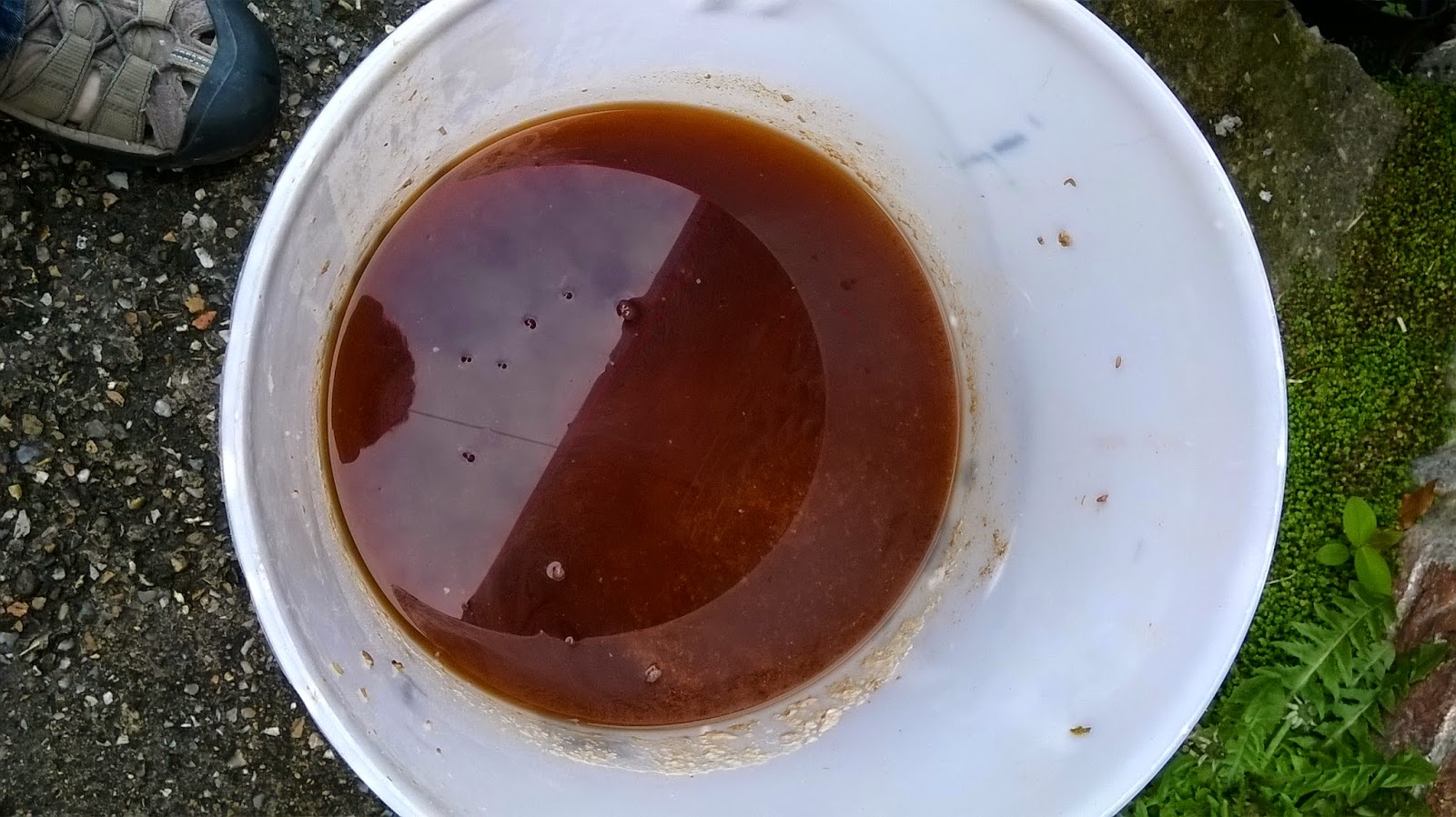 Out of sheer curiousity I have put the brew back into the airing cupboard, just to see what happens. But I have every expectation that it will end up going down the drain. Was it a wasted day? It was certainly exhausting and I am still recovering from the late night. I doubt it will produce anything drinkable but it has been an experiment and even failed experiments teach us a lesson. What would I do differently next time, if there is a next time? I will hopefully be armed with more knowledge (maybe resulting from this blog) but at least I won’t be attempting it for the very first time; I have some experience now. I must certainly look at the malt bill and the baking times and the temperatures; they must be critical. Maybe I baked it too hot and/or too long; maybe just too much was loaded into my oven. Maybe...

It cost me a day but I now have more experience in making keptinis than almost anyone else alive. I just don’t have any keptinis yet. Ha ha ha. Cheers.
Posted by Martin Warren at 05:01