On most occasions when I go to Norwich nowadays I call at the Two Brewers Beer and Cider Shop in Magdalen Street. It is up near the traffic lights at The Artichoke end. I would encourage you to do the same as it is lacking in customers. Use it or lose it, as they say. Good craft beer isn't the cheapest way to drink but once again it is a question of quality versus quantity and the difference between price and value for money.

In Carlos Branquinho's tiny little shop you can not only find Norfolk Square's excellent ales but a whole host of beer from other craft breweries in Norfolk. I especially go for Green Jack's big swing-top bottles of Baltic Trader Imperial Stout, the fantastic Ripper barley wine and the last time I bought Gone Fishing ESB (£7 for 750 ml). Furthermore, without the expense of travelling to the Continent or even America, you can enjoy beer from world famous breweries like Dogfish Head, Uinta, Goose Island and Mikkeller. 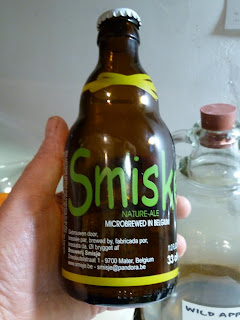 A new brew on me was Smiske natural ale from the Smisje microbrewery in Mater, Oudenaade, Belgium. I lashed out £3.50 on the little 33 cl bottle (7% abv) and hoped for the best. When I got home, I drank the Gone Fishing while I made a (fantastic) lamb curry and it was a wonderful example of a strong English ale or extra special bitter. Then I moved on to the Smiske. On opening it, I sniffed the bottle. Oh, surprise. TCP! But when I poured it the aroma all but disappeared. This phenolic flavour in beer is usually considered a fault but in this case it most certain is not! I poured it into a nice stemmed glass and it built a fine white head and had a golden colour. The first taste was unusual. Mmm. Yeasty, but in a good way. Slightly smokey, coal, medicinal; bitter from noble hops, flavoursome, phenolic, TCP again, dry and that long, long yeast. Wow, I liked it! This golden Belgian ale had plenty to say. It was assertive and I am sure you won't have had anything quite like this, except perhaps real Pilsner Urquell (with its pitch-lined barrel aging), only this was more so and better for being bottle conditioned. This was well-aged I suspect. Coor! Are those Hallertau hops, or Styrian Goldings perhaps? Full-flavoured and stonking. Smiske shows what a good yeast can do for beer flavour and I really recommend it. Get on down to Magdalen Street and get some Smiske, while stocks last.

I am cultivating the live yeast from the bottom of the bottle and multiplying it up with the intention of pitching it into a 5 gallon batch of home brew sometime soon. Watch this space.
Posted by Martin Warren at 11:01